An Ethos of Responsibility and Indigenous Women Water Protectors in the #NoDAPL
Meredith Privott, jpriv003@odu.edu 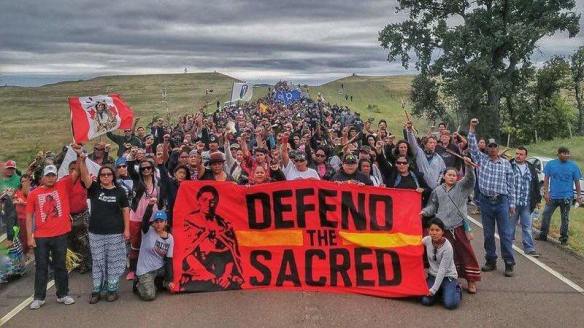 Applying a cultural rhetorics methodology alongside Royster and Kirsch’s concept of strategic contemplation, this works constellates an understanding of an ethos of responsibility utilized by Indigenous women water protectors in the #NoDAPL movement, as seen in video-recorded interviews selected from the #NoDAPL Digital Archive. When speaking from an ethos of responsibility, the water protectors featured in this study locate agency in traditional teachings and in the experience of Indigenous women, including responsive care in/to the interconnectedness of life, the special role of women in the care of water, and the collective survival of Indigenous women in colonial and patriarchal violence.

Using Rachel Wolford’s diachronic and synchronic model of rhetorical agency, this paper explores the rhetorical agency employed by players in the creation and posting of World of Warcraft guild recruitment posts for women and LGBTQA-friendly guilds. The posts were gathered as part of an archive curation project. I argue that the creation of these guilds and the advertisement of their existence publicly highlights several rhetorical goals. The first goal is to create and sustain an in-game space for players who do not identify as the stereotypical heterosexual male player that is assumed to be the identity of most players. The second goal is to provide a space where women and LGBTQ folks feel welcome – in other words, they do not have to deal with sexist or homophobic comments, can avoid harassment and derogatory statements, etc. Finally, this allows the guild creators and recruits to dictate their own terms for communal play.

Breastfeeding has recently reached a point of public backlash as an indecent act. Nowhere has this backlash been more apparent than on social media. Two aspects of nursing – breastfeeding in public and the duration of breastfeeding – have been open to new channels of criticism. Yet social media has also created a space of activism for nursing mothers to reclaim their rights over their bodies and their agency. This work investigates visual artifacts produced by and for a particular social media community, The Badass Breastfeeder, through a visual rhetorical analysis. With this analysis, I seek to trace the community’s influence from cultural activist movements that came before and define and confirm its feminist rhetorical appeals to make extended breastfeeding and nursing in public mainstream.

Rosa Sonneschein’s American Jewess (1895-99) provided Jewish women in America with advice, news, and entertainment. It was conceived after an era of great public education, and readers could learn about Zionism and anti-Semitism – issues of potentially grave importance in their lives – or settle in with stories by Kate Chopin and Mark Twain. American Jewess supported philanthropy, economic mobility, and civic engagement. It is both written in and very supportive of a collaborative philosophy of mind, potentially of interest to feminist rhetoricians. To a wider audience, the archive provides charming ephemera while somehow remaining distinctly modern.

Using feminist rhetorical methodologies, this essay identifies and analyzes the women’s rhetoric found within Facebook’s Cancer Caregiver Support Group. The aim of this study was to evaluate the rhetorical intent of the communication within the group and argue that the discourse happening within the well-defined online space may be regarded as an archive of women’s rhetoric. The employment of a feminist methodology used to evaluate online communication in this project is also meant to help set a precedent and serve as an example of ethical online research practices.

When tweets go viral, it is often because they have created a rhetorical situation. However, when mansplaining tweets go viral, responses to situation are disproportionately influenced by gendered constraints. This work examines mansplaining as a form of disciplinary rhetoric intended to silence and overwrite the female voice. An analysis of types of rhetorical responses to mansplainers is conducted using a twitter archive of nearly 1,000 tweets. The tweets are then gender-coded and further analysis performed to determine if mansplaining’s silencing effect is visible within the archive. The results highlight the need to understand mansplaining as more than a harmless phenomenon, and instead as an aggressive disciplinary rhetoric aimed almost exclusively at women.

The paper posits that hashtag feminism is an act of public memory. #Yesallwomen is explored to explicate this claim. This form of public memory prioritizes the collective memories of women instead of the individual. If you think about feminism, some of the first images that come to mind are the gains and rights that were won, but also iconic feminists such as Alice Paul, Lucretia Mott, and Gloria Steinem. Therefore, the hashtag has democratized the public memory of feminism. However, it is not devoid of female tokenism. The debate between Barbara Biesecker and Karlyn Kohrs Campbell is referenced to elucidate this point. What about poor women who do not have access to the internet? What about disabled women? What about women who do not use Twitter?

The Jagged Edges of Methods and Methodologies: Reflections on the Creation of an Online Audiovisual Archive for Future Archivists
Casey Reid, mreid002@odu.edu

In this paper, I discuss the process of co-creating a born-digital audiovisual archive in an effort to elucidate my attempt to enact Royster and Kirsch’s concept of strategic contemplation using McKee and Porter’s principles of feminist research methodology as a guiding framework. This act of strategic contemplation culminates in suggestions and cautions to consider when creating a feminist-inspired online audiovisual archive using living participants, highlighting the complexity of constructing a transformative project for participants.

To resist recent research trends that threaten to erase a nuanced approach to gender in writing center scholarship, this project developed and analyzed an archive. I first employed a feminist standpoint to curation of an archive of all texts published in a variety of venues that engage with feminism or feminization of/in the writing center. The analysis of the archive follows the “critical historical survey” example of Joy Ritchie and Kathleen Boardman. Through rereading the archive, I determined that approaches largely fell into four tropes. Unsurprisingly, the category that has the most representation is texts that embrace feminist perspectives, which supports arguments that the writing center grand narrative is mostly feminized and occasionally feminist. Yet, other distinct approaches exist, including calls for more gender balance. While critical lenses have attempted to point out the risks and damages of feminization, feminist methodologies are the only approaches that show potential for uncovering the historical, social, and cultural influences of gender in the writing center.

As feminist rhetorical scholars assert, women’s stories matter. To be fully heard, we must (re)present our stories in multidimensional ways which subvert normative approaches to research. In my analysis, situated at the intersection of narrative inquiry and feminist rhetorical methodologies, I adapt pastiche as a method of (re)presentation to tell one woman’s story of her acquisition of voice from oppressive silence. I argue that pastiche is a method of analysis and (re)presentation which encourages us to amplify multidimensional voices and to “voice” stories multidimensionally.

Women’s Poetry Blogs are often maintained by “early poets,” or poets who still show the hallmarks of being early in their writing careers; however, within their blogs and through their poetry, they establish a personal ethos for themselves and their work. My article is an exploration of how women poetry blogs create ethos in terms of feminist ecological approach to ethos rather than an Aristotelian construction of ethos and how the commenters on their blogs indicate and reinforce the ethos they have created.